HOW IT WORKS: The International Space Station 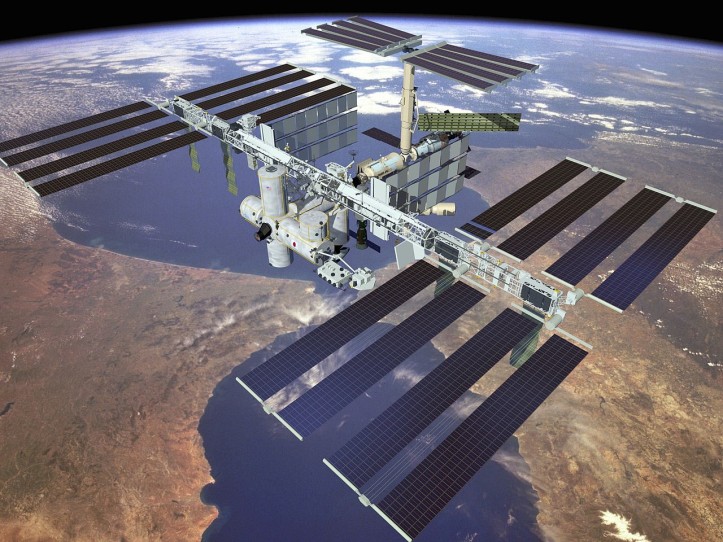 The International Space Station offers a unique vantage point for observing the Earth’s ecosystems with hands-on and automated equipment. These options enable astronauts to observe and explain what they witness in real time. Station crews can observe and collect camera images of events as they unfold and may also provide input to ground personnel programming the station’s automated Earth-sensing systems. This flexibility is an advantage over sensors on unmanned spacecraft, especially when unexpected natural events such as volcanic eruptions and earthquakes occur.

A wide variety of Earth-observation payloads can be attached to the exposed facilities on the station’s exterior; already, several instruments have been proposed by researchers from the partner countries. The station contributes to humanity by collecting data on the global climate, environmental change and natural hazards using its unique complement of crew-operated and automated Earth-observation payloads. 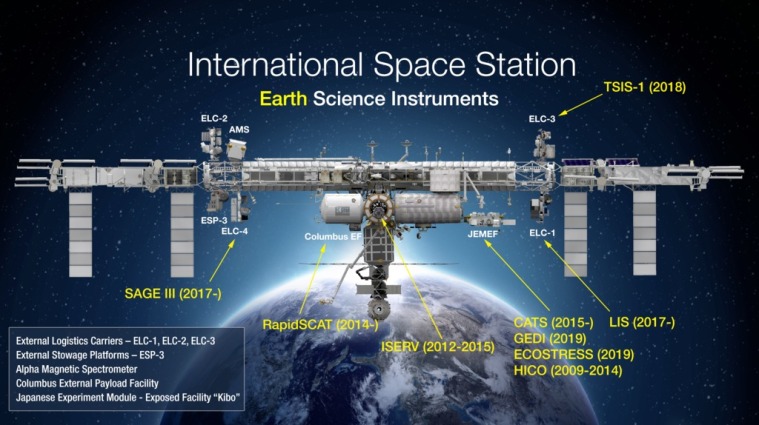 Construction of the Integrated Truss Structure over New Zealand 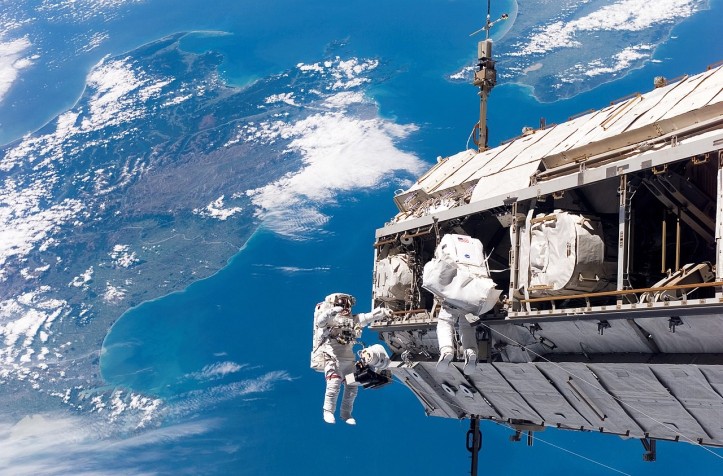 The International Space Station (ISS) will be the largest human-made object ever to orbit the Earth. The station is so large that it could not be launched all at once — it is being built piecemeal with large sections added continually by flights of the Space Shuttle.

To function, the ISS needs trusses to keep it rigid and to route electricity and liquid coolants. These trusses are huge, extending over 15 meters long, and with masses over 10,000 kilograms. Pictured above earlier this month, astronauts Robert L. Curbeam (USA) and Christer Fuglesang (Sweden) work to attach a new truss segment to the ISS and begin to upgrade the power grid. Credit: NASA

This unique video shows a full launch of the Soyuz MS-09: from liftoff to orbit.

Watch the launch from inside the crew capsule with first-ever shots from outside the spacecraft recorded by cameras fixed to the exterior of the Soyuz.

The intense launch lasts less than ten minutes whereby the Soyuz spacecraft is propelled 1640 km and gains 210 km altitude. Every second for nine minutes, the spacecraft accelerates 50 km/h on average as the rocket’s boosters burn their fuel and are discarded.
See the astronaut’s reactions and what the spacecraft looks like as the main steps are carried out to get into orbit:

Hunched in their Sokol flight suits that offer protection in case of fire or depressurisation, the trio stay in the crew capsule of the Soyuz – the only module that is also designed to survive a return to Earth. The bags above their heads contain supplies for the International Space Station as every bit of space is used.

During a Soyuz launch astronauts typically experience forces of up to 4g – having to work while being pressed into their seats with a force that is four times more than the gravity felt on Earth. The Soyuz commander uses a stick to press buttons as they are too far away from the control panel.

The fluffy toys above the astronauts’ heads are mascots and good luck charms but also serve as a simple but effective test to see when the spacecraft is in orbit: when they start to float the spacecraft is weightless and orbiting Earth. Above Sergei is the mascot for the 2018 FIFA soccer World Cup held in Russia. Alexander took German children television icon “Die Maus” with him.

The launch went as planned as the 50-m tall Soyuz rocket propelled the astronauts to their cruising speed of around 28 800 km/h.
For this launch the astronauts took 34 orbits of Earth over two days to arrive at their destination spending their time in the cramped orbital module of the Soyuz that is no larger than a car. With limited communications and living space the astronauts had time to adapt to weightlessness and reflect on their mission ahead. They aligned their spacecraft with the International Space Station and approached the orbital outpost for docking on 8 June 2018. The files for this video were downloaded by the astronauts after arriving at the Space Station.

Expedition 33 Lands in the Snowy Steppe of Kazakhstan

Everything About Living in Space

With only five minutes but an unlimited number of questions, you can find out what it’s really like to live on the International Space Station—if you also have NASA astronaut Reid Wiseman, who spent 165 days in space during Expeditions 40 and 41 in 2014. Listen as Wiseman answers the questions you would ask about real life in zero g: how big is the space station, is it very hot or cold there, was the food any good, did you prank-call anyone from orbit, and many many more.

If a fire were to break out on a spacecraft in orbit, astronauts would fight the flames in slightly different ways than they would on Earth. Fires in space are not the same as fires on Earth, but the best way to fight any fire is to keep it from starting.

As hot gasses from a flame rise, they create air currents that bring fresh air to the fire. This buoyancy is what makes a flame long and pointed here on Earth. In low gravity situations, there is no buoyancy from flames.

Tall, yellow flames burn on Earth (left) and small, blue flames burn in space, in a free fall environment, such as that found on the ISS (right). Credit: NASA

Convection, the movement of air, is an important way that heat is transferred to other spaces. Without air, fires don’t spread as rapidly. Ventilation fans on the Space Station replace natural convection and can supply the air a fire needs to burn. Under these circumstances, the fire can spread in any direction, rather than just upward.

The flame’s unusual shape creates different amounts of soot, smoke or harmful gases. “Combustion in microgravity is a very difficult problem, and there are a lot of engineers and scientists working to understand it better,” said Gary A. Ruff, aerospace engineer at Glenn Research Center’s Microgravity Combustion Science Branch in Cleveland, Ohio.

All materials going up into space are tested for flammability on Earth in a special test chamber and ignited with a hot wire. Some items are so important to a mission’s success that they’re permitted to travel to space despite being flammable.

Detecting a fire in space is also different than on Earth. Here, smoke detectors are installed on the ceiling or upper section of a wall because that’s the direction in which smoke travels. In space, smoke doesn’t rise, so detectors on International Space Station are placed within the ventilation system.

While the ISS hasn’t experienced a fire, a significant blaze did take place in 1997 on the Russian Space Station Mir. The fire came from an oxygen generator, where the oxygen supplied a ready source of fuel. Tests showed that the generator had to run out of oxygen for the fire to burn out. If a fire were to occur on the ISS, the astronauts would become firemen and follow a three-step response system.

First, they would turn off the ventilation system to slow the spread of fire. Next they would shut off power to the effected unit. Finally astronauts would use fire extinguishers to put out the flames.

Ruff says that while safeguards have been in place to prevent a fire from occurring on the Space Station, it’s comforting to know that astronauts could respond to an emergency because they’ve prepared for any eventuality

South America, the white stripe of the Andes, and the Moon in the background