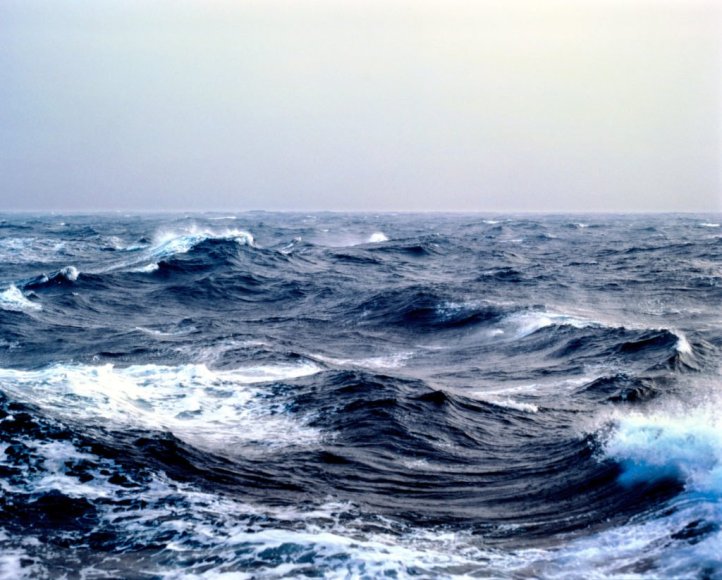 The challenge is the design, development and validation of cost-effective Wave energy convertors that can survive in a harsh and unpredictable ocean environment as the ocean through demand-driven Pre-Commercial Procurement. The challenge is open to proposals seeking to steer wave energy research and development in an effective way at a European level establishing convergence of wave energy technologies and to bring these technologies to the market.

In the past years, Member States and the European Commission have been working closely together to use their public resources via previous Ocean ERA-NET Cofund actions but like to reinforce their cooperation to address the challenge through a different funding instrument. In this European PCP action it is the aim to elevate experience with national public procurement approaches at a European level to bring European Wave Energy Research and Development more efficiently into the direction of commercialization.

The proposed action is to be structured along the following phases:

Preparation phase: The participating users/buyers of R&D service should agree on common performance levels and associated specifications for the wave energy systems. The action should introduce the ocean energy phase gate procedure on a European level.

They will plan the research and the design of actions covering a broad variety of issues. The PCP will consist of several building blocks addressing different sub-challenges. The funding of the participating programme owners (national and/or regional) and the European Union will be used for different stages in the wave energy technology development. The results of phase 1 should lead to calls for tenders (for the procurement of R&D services) which focus on clearly identified technologies which contribute to the development of commercial wave energy devices. The procurement should be also open for developers, researcher organisations which are not located in the participating countries/regions.

The expected outcomes at this stage: 1) completed tender documents, 2) signed joint procurement agreement confirming the collaboration modus including the financial commitment of the buyers group and 3) final confirmation of the lead procurer.

Execution stage: The action will take care for the implementation of the Pre-Commercial Procurement and of the PCP contracts. The results will be shared within the European industry to accelerate technology development and the establishment of guidelines and standards to facilitate the transferability of the knowledge creation. The research and specification work should lead to at least 3 prototypes tested in an environment close to expected performance. At the end of the action at least one of the prototypes should be ready for testing in an operational environment at commercial scale.

Proposals have to describe the jointly identified challenge, indicating how it fits into their mid-to-long term innovation plans, why solutions currently available on the market or under development are not meeting their needs. Activities have to include: (1) networking related to preparation, management and coordination and (2) joint research activities related to the validation of PCP strategy.

The consortium should have at least three legal entities established in different member states or H2020 associated countries. In the consortium the participation of minimum two ‘public procurers’ is required. Other entities might be considered which can have a clear added value in the preparation and/or execution of the PCP or in coordination and networking activities.

Please see part E of the General Annexes for the specific proposal requirements for PCP actions.

This activity directly aimed at supporting public-public partnerships with Member States and associated countries, and technology platforms with industrial partners and earth observation networks and will be implemented by the Commission services.

Infographic: How is research tackling the need for cost reduction and reliability of ocean technologies  ©European Union, 2018

The Maritime province’s two-megawatt turbine is now connected to the power grid.

Nova Scotians are about to receive a flicker of power from North America’s first in-stream tidal turbine. On Nov. 7 Cape Sharp Tidal, a partnership between Emera and OpenHydro/DCNS, deployed the first of two 1,000-tonne two-megawatt turbines at the Fundy Ocean Research Centre (FORCE) in the Bay of Fundy’s Minas Passage and today, it was connected to Nova Scotia Power’s transmission system. The turbine will help power 500 homes.

A second 16-metre turbine will be lowered into the surging tides in 2017 and complete the first phase of a commercial-scale tidal energy project at FORCE, which aims to produce up to 300MW of power in the 2020s.

FORCE is a non-profit organization that provides a testing site for tidal technology in four underwater, 200-metre-wide berths (the only sea floor in Fundy with a Crown lease for energy development), and doubles as a research institute with an environmental watchdog mandate.

These infographics, adapted from a larger piece that appeared in Canadian Geographic’s July/August 2015 issue, depict the four tidal-power prototypes (including the Cape Sharp Tidal turbine) that had been signed up for testing at FORCE at the time of the magazine’s publication, and where they were set to be deployed. 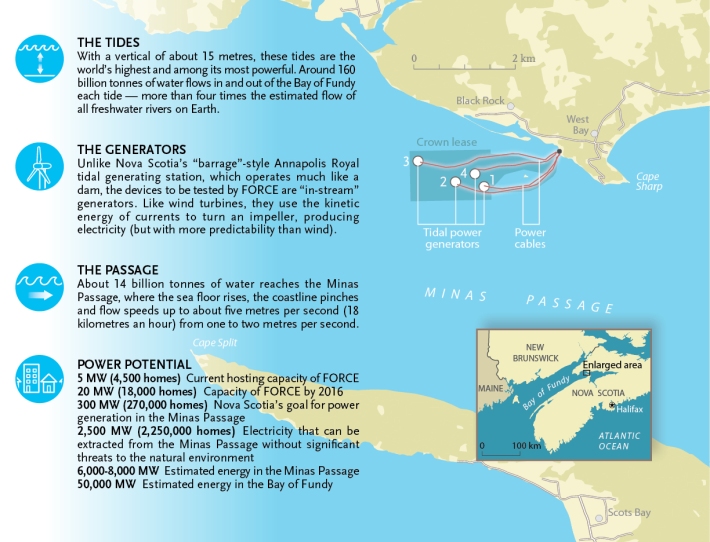 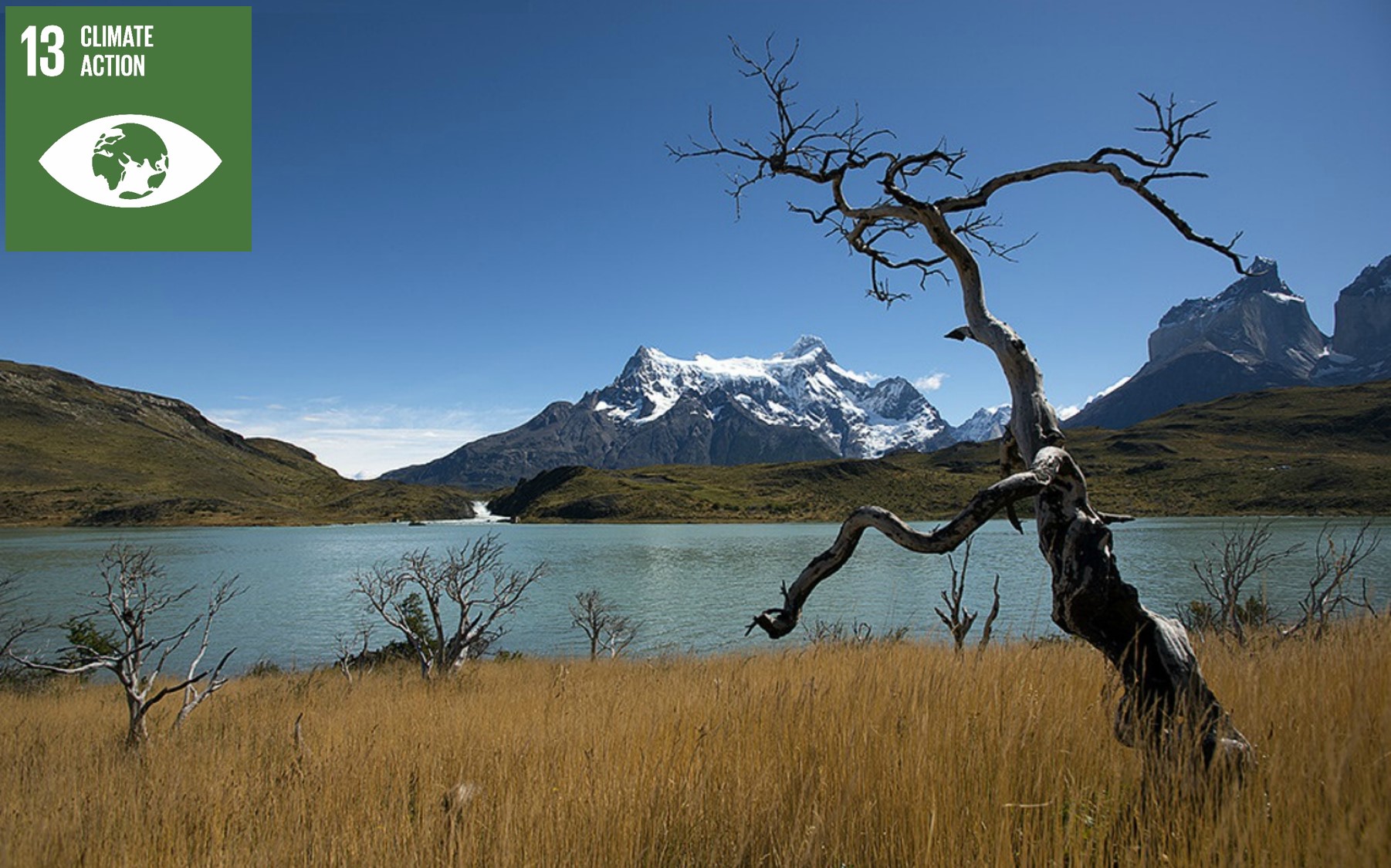 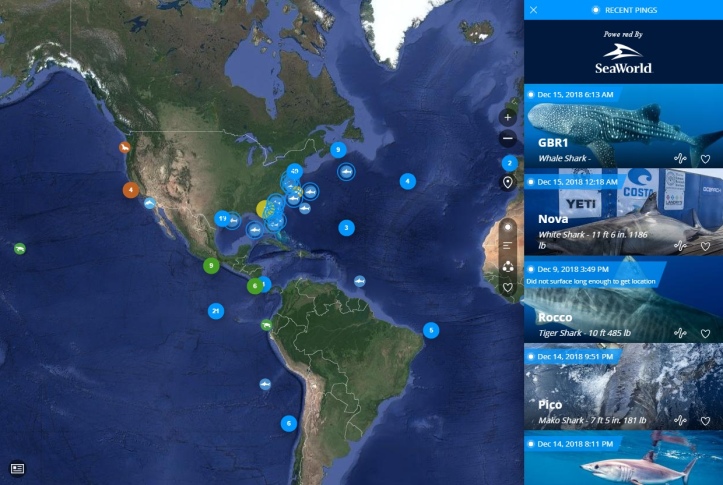